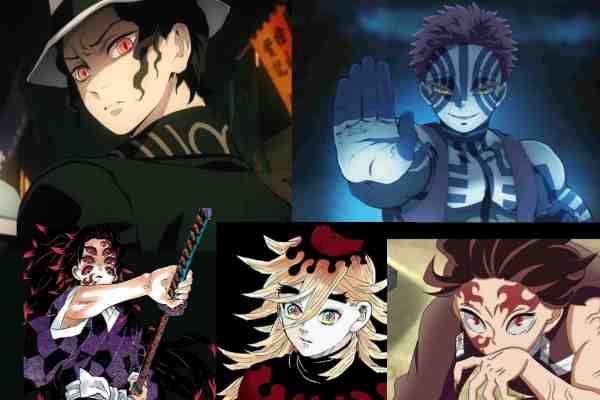 Demons are the creatures on which the show is based on. These creatures eat humans and consider themselves as foods. There are lots of demons in the demon slayer series. These demons are ridiculously strong. In the series, the upper moon demons are considered to be the strongest demons. But still there are some extra high rank demons too. So here are the top 10 strongest demons in demon slayer history.

At number ten, we have Daki. She is an upper moon six and beautiful also. Her blood demon art technique allows her to release sash like tentacles to attack the enemy. These sashes are razor sharp and work like a blade to cut off the enemies into pieces. Not only that, the sashes also work for her defences. She can transform herself fully or partially into sashes. So it becomes difficult to cut her neck. She is the twin sister of Gyuutarou. Her head was cut off multiple times by Inosuke’s blade but her brother’s head was still on his body and to kill both of them, their heads need to be cut off at the same time. That’s why it’s very difficult to defeat them.

At number we have Gyuutarou, the twin brother of Daki. He also is stronger than his sister Daki. His blood demon art uses two sickles that are made out of his body. These sickles contain poison. If someone gets affected by this poison and leaves it untreated, that person will die slowly. Gyuutarou can send flying blades of blood towards the opponent. If the opponent is able to dodge the blades, Gyuutarou can manipulate the blades until the blades hit that person. He can even take control of her sister for synchronized attacks. Unfortunately he was beaten by the sound pillar Tengen with little help from her wives and Tanjiro. Tengen Uzui had lost an arm and an eye in the fight. He even got poisoned by Gyuutarou’s blade and he almost died of it until Nezuko’s blood demon art burnt the poison in his body.

At number eight, we have full powered Nezuko Kamado. Her blood demon art uses her blood to burn demons and heal humans without causing any harm. She also has a demon transformation that enhances her powers exponentially. However she loses consciousness and is unable to identify between friends and foes. Whenever she is in this transformation her healing abilities and powers surpass an upper moon. We see this transformation in the fight against Daki. Nezuko totally overpowers Daki in the fight. Despite being an upper moon, Daki can’t defeat her. She herself admits that Nezuko is more powerful than her.

Although it looks unfair to put her above Giyuutarou. It’s Because later in the series, Nezuko conquers the sun. So she naturally becomes more powerful than other demons. However the story doesn’t follow a proper strength development of Nezuko while Tanjirou becomes way more stronger. Although in the final chapters she becomes a human again. So she is no more strong like her previous self. But there are many things other than strength.

Upper moon five Gyokko can teleport between pots and he can produce deadly sea creatures from his pots. For example, he can create fishes that shoot thousands of poisonous needles. His skills are so sharp that he trap Muichiro into a water bubble. Gyokko is overpowering Muichiro the skilled mist pillar until Muichiro activates his demon slayer mark. With the power of demon slayer marks, Muichiro becomes faster and more powerful than Gyokko. After that Gyokko unlocked his final demon form. In this form, he can transform anything to a fish, just by punching that thing. However it was not enough to beat Muichiro.

The upper moon four Hantengu is very strong and tricky because He can split himself into different clones. These clones represent different emotions and different powers. Every emotion emits different attacks. Like Anger launches lightning attacks. Joy launches air bending attacks and sorrow emotion uses shrinking ability and growing spirit of fight. At last the hatred emotion, it is the most powerful one and it can create big 5 headed wooden dragon. Hatred is formed when anger absorbs the others. The only way to kill Hantengu is to kill his real body which travels in armour. This armour looks the same as his. It’s just bigger and more durable. Tanjiro defeated him with the strong help of Love Pillar Mitsuri with awakened demon slayer mark, Nezuko and half demon transformed Genya.

Now it may be controversial to place the upper moon two Douma below the upper moon three Akaza but there are some reasons behind it. Douma’s blood demon art uses ice. He can also summon a big ice statue and capture his enemies with his ice clones. Despite being so powerful we never see his full power. Being an upper moon means that the demon can regenerate his head. But after his head was cut off, he couldn’t regenerate it as he was poisoned by Insect pillar Shinobu Kochou. Whereas Akaza regenerated his head. It’s not like Douma isn’t strong but we never got any opportunity to see his full power. Thus we can only talk about ‘what if’ scenarios. That’s why Akaza is above Douma.

Akaza is one of the strongest demons in demon slayer series. He uses his martial arts alongside his blood demon art techniques. This deadly combination creates dangerous attacks. That’s the reason Akaza was able to kill Kyojorou Rengoku and many other pillars. He almost defeated Tanjiro and Giyu. Although Tanjirou cut his head off using his “see through world” technique, Akaza regenerated his head right after that. Meanwhile Tanjirou got unconscious. Fortunately, Akaza regained his old human life memories and decided to self destruct himself. Otherwise it might be the end of Giyu and Tanjirou.

He decided to become a demon because being the second best always clings in his head. So to become stronger, he decided to become a demon. During the last battle against the demon slayers, he realised that he was strayed down from the right path and he was not a human and worthy to be Samurai like his brother. This is not the path he wanted. So Just like Akaza, He also regrew his head back but lost the fighting will. Thus he self destroyed himself.

Muzan is the one who created all the demons. He is the main antagonist of the series. He was only beaten in the end because of everyone’s help. Lady Tamayo came up with a poison that drastically aged Muzan and made him weak. They were also able to bring Muzan to the surface under the direct sunlight. Despite being a weak situation, he was able to kill Iguro, Mitsuri and Giyomei at the last battle. Muzan has tentacles in his whole body which emits demon poison. A drop of this poison can kill anyone instantly. He can also attack with shockwaves that paralyzed is enemies for a little time. In spite of being so strong Muzan isn’t the strongest character. He was defeated once when he was fighting Yoriichi. Muzan may not be the strongest character but he is the strongest demon until he passed his succession.

Tanjirou, who wants to defeat Muzan, accidentally becomes the next demon king. Even Muzan admitted that Tanjirou will surpass him in power. Unlike Muzan, Tanjirou can go in sunlight and still can use his sun breathing. His power is almost similar to Muzan’s power. Demon king Tanjirou had overcome every weakness that a demon had. The only way to stop him was to give him some kind of medicine or try to send their voice to Tanjirou’s soul so that he can identify them and stop them automatically. At the end it happened. Tanjirou accidentally eats Nezuko’s blood that included Lady Tamayo’s medicines. After a few moments, the medicine worked and Tanjirou regained his consciousness. Not only the medicine but also the words from his beloved people also helped him to come back to his senses. Otherwise there will be no way to stop Tanjirou.

These are the top 10 strongest demons in the list although all of them are based on their combat skills. Otherwise Lady Tamayo would be on the list also. There are other replacements of upper moons also but they’re not as strong as them on the list. That’s why they are not on the list.